Somehow, I came across a quote by romance writer Norah Roberts a few weeks ago (I swear I wasn’t reading her latest novel or anything). Its simplicity was so on-the-mark, it stuck with me. 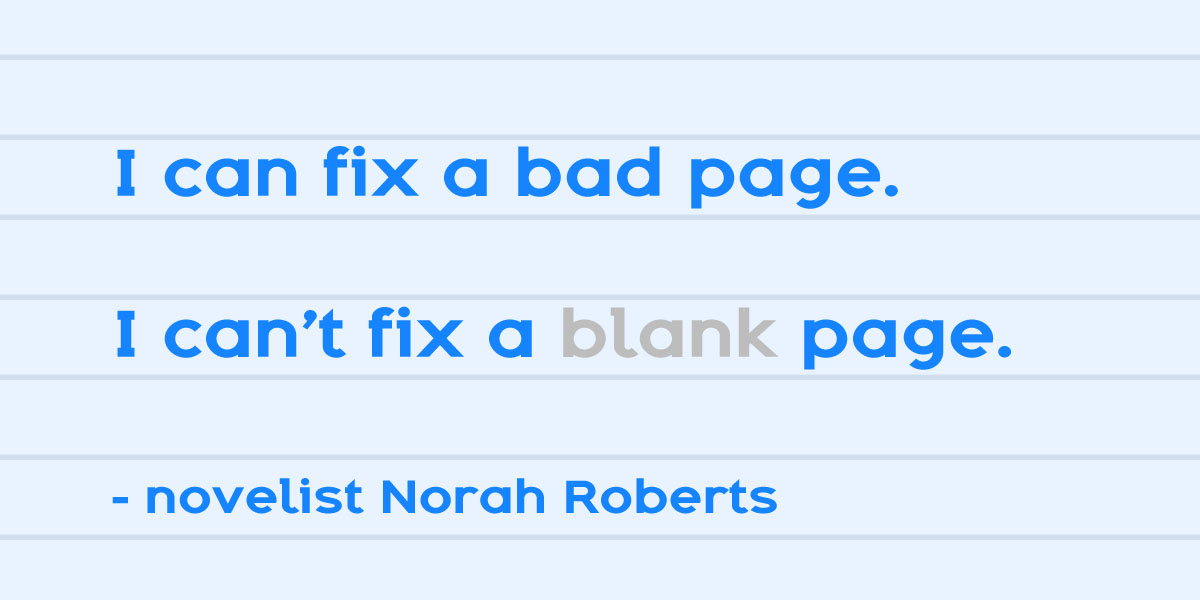 The blank canvas is such an idealized thing. It represents to us that whatever we have in our heads just needs blank space to be told. But in reality, stretched parchment is cheap and in abundance, a blog can be started in a few mouse-clicks, and recording software is a free download or pre-built into our computers.

Why aren’t there so many more paintings being painted? Papers being written? Songs being released? Inventions being patented?

Because a blank page isn’t the beginning of anything. It’s simply an opportunity that, left untaken, barely amounts to the sum of its parts.

A bad page, however, is where almost everything starts.

Ed Catmul, president of Pixar, wrote in his memoir Creativity Inc. that EVERY MOVIE THEY HAVE EVER MADE SUCKED…at least in the beginning. How harsh is that for a filmmaker to hear? Every film by one of the most successful studios sucked at first? Whatever happened to the genius of a great idea that only needs to be realized? Nope. To him, they all just “sucked until they didn’t suck.”

We never want our work to suck, so we play the ideas in our heads over and over before even thinking about starting to actualize them in written/spoken/painted/captured form. We don’t want to leave any evidence of the crime-scene from what we thought was genius, but really just started off as a bloody mess.

This quote by Norah Roberts is messy, but if true, rearranges the list of what’s really most important. And that’s beginning not with empty space but with something concrete to work with and build on.

Here is how I avoid starting with blank pages in my work. While talking to a client about a new project, I’m building a reservoir of ideas, thoughts, and desires in Evernote (note-taking software I can’t live without). As I listen to my clients talk about their company, customers, ideas, dreams, even what gets them up in the morning, I’m collecting any key phrases or words they use, so I’m immediately starting with something from them rather than a blank canvas.

From there, I freeflow a bit, sometimes out loud depending on the client, about ways we can convey their intended message. If something I say sticks with them, we push out other iterations of that idea until we feel comfortable with the concept. When we finally go to script and plan out what exactly we are actually going to create, I’m not beginning with nothing. I’ve already been collecting tons of thoughts that are on the page and ready to be reorganized and refined for me to make “less sucky.”

GET IT OUT OF YOUR BRAIN

Worrying about that bad page of fragmented ideas in Evernote only hinders this process. I need to pull them out of my brain and put them in a concrete place where I can actually see them and explore other paths that connect to or lead away from a given idea. It’s a lot easier to look at actual clips, words, or images and find the thing that has the most emotional impact than it is to try and dream up something you think will be valuable before considering how it can actually be conveyed. Because putting that pressure to be great on the first draft inhibits you from exploring the routes that will actually lead to creating something great.

What can I sketch on the blank canvas today?

Do I embrace bad pages, or do I let the fear of my work being bad keep the pages blank? Is there some project I’ve been thinking about and not actually doing anything about? What are some ways I can jump-start my work so I have a bank of ideas to start with rather than from scratch?

What have you been hoarding for yourself that you need to finally give away?

[Post edited and enhanced with the support of Caleb Waggoner.]