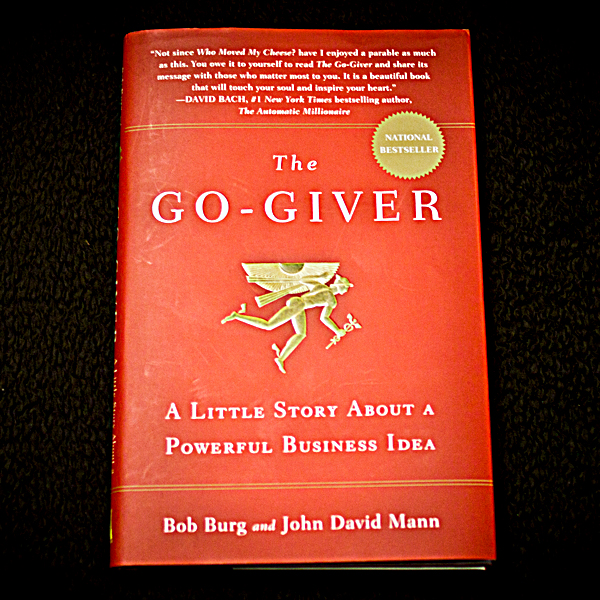 [Disclaimer: This isn\’t meant to be a book review, rather my intentions are to share thoughts that I resonated with.]

Most people laugh when they hear that the secret to success is giving… then again most people are nowhere near as successful as they wish. – The Go-Giver

There is a growing section of business literature utilizing fiction to share principals and practices. Almost like parables. The Way of the Shepherd, The Traveler\’s Gift, and Leadership and Self-Deception are a few I\’ve read in the past few years that all do much of the same thing. A fictional narrative to deliver an idea, many of which include a primary, unenlightened character whose toiling through work like a normal person, and then he or she meets an advisor, guide, or mentor(s) that change his or her way of thinking. So whereas you have concrete data or real-life stories to consider in most books on business, those that use this format come at you through imagination. As in the case of The Traveler\’s Gift, you really have to suspend reality, as the character travels through time, meets famous people (including his future self), and even Gabriel the angel.

If it\’s not obvious from the play on words in the title, The Go-Giver: A little story about a powerful business idea aims to convince you to replace your drive of getting into giving. Success and everything that comes with it is reaped through living a life of creating value for other people. And not just justifying the price-tag, but blowing them away so they can\’t help but continue to work with you.

The chapter I came back to immediately upon finishing it on a few flights I took from Indianapolis to LA was on the second law of five called “The Law of Compensation.” In it our unenlightened protagonist meets a former school teacher turned CEO who took games she made up for her kids and scaled them virtually so more students could be helped. But she almost didn\’t, because she was afraid of success. For her there was a disconnect between being successful, or making money, and doing good. As if there is no room for both to occupy the space. But here is how it changed for her:

I watched how hard my partners were working. I saw how many kids lives we were changing. And I saw that my old belief system was only getting in the way. It wasn\’t serving. So I decided to change it.

For her, she had to change the focus towards the people she was helping. She told herself a new story to act on and try to make real. And the Law of Compensation is as follows:

Your income is determined by how many people you serve and how well you serve them.

I\’ve seen for me a slow growth in my work. For three and a half years I\’ve been able to capture and create on a manageable  scale for clients and friends that I believe in, whose work I think is important. But I can also say that although I want to do more, I\’ve stayed mostly in a small scale because of that exact fear, of the responsibility that comes with doing more, building better things that can touch more lives. Thinking about myself, what failure would mean, and not thinking about the numerous amounts of more people who I could also be serving would I just take another chance or try to do something I\’m not 90% comfortable I can come through on.

This was the chapter I instantly connected with and had to read again. Because I think it was speaking directly at me.

Checkout the book, I highly recommend it even just to borrow and steal some thoughts that can impact your work, life, or relationships.